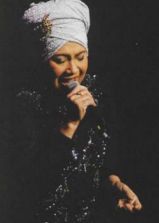 Rahimah Rahim is a veteran performer in the local music scene and one of the most popular entertainers in the 1970s and 1980s. Born to a singer father and actress mother, Rahimah was exposed to acting and singing from an early age. She came into her own when she won the prestigious Kim Koso Talentime in Japan in 1974. She returned to Singapore and performed at some of the most popular clubs. She also has more than a dozen recorded albums. Between 1989 and 2003, Rahimah faded from the entertainment scene. She returned to show business with a recorded album in 2003. Since then, Rahimah continues to make occasional appearances in functions, singing shows and on television.

All Albums by Rahimah Rahim

All Songs by Rahimah Rahim