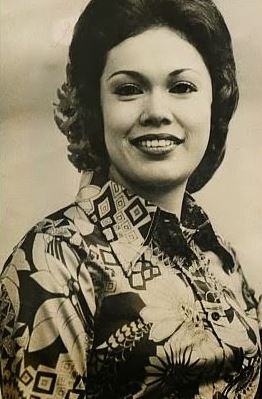 Kartina Dahari was a Singaporean Malay singer and entertainer who was a fixture on television and radio from the 1950s to the 1980s. Dahari, who was nicknamed "Queen of Keroncong," a type of Malay folk music popular at the time, was best known for her hit single, "Sayang Di Sayang", which was composed by Zubir Said. She was the first Malay language singer to record English language songs, releasing four EPs, two LPs and four singles in that language. In 2009, Dahari was awarded a Golden Award, which was presented to her by former President of Singapore S. R. Nathan. She was also the recipient of the Artistic Excellence Award, which was bestowed on her in 2010 by The Composers and Authors Society of Singapore. Her last public appearance took place at the Esplanade, Singapore in 2013 when she went on stage to express her appreciation for the support shown by the organizers and her fans, at the close of her tribute concert performed by her peers. In March 2015 Dahari became the first singer/entertainer to be inducted into the Singapore Women's Hall of Fame. Image & Bio retrieved Apr 2016 © All rights reserved, http://america.pink/kartina-dahari_2389422.html

All Albums by Kartina Dahari

All Songs by Kartina Dahari